Whose deficit is it anyway?

My wife recently posted some political thoughts on Facebook…something she rarely does and in the discussion thread there was a talk about who is more fiscally conservative the Republicans or the Democrats.  One of our friends had said that Clinton had balanced the budget and my wife responded that there was a Republican control of the House and Senate during that time.  Another friend of hers had said that it was Republican military spending that caused the Republicans to spend more than Democrats.  I did some statistical analysis on the numbers and you might want to read my prior post How to Lie With Statistics to realize that this is often a losing proposition.  Still, I felt that I had to…yes I do resemble Don Quixote at times.

So, let’s go to the tale of the tape.  First stop the wonderful website www.usgovermentspending.com which has amazing historical data on US spending going way back.  For my purposes I went back to FY1946 through FY2013 (both FY2012 and FY2013 are estimated) 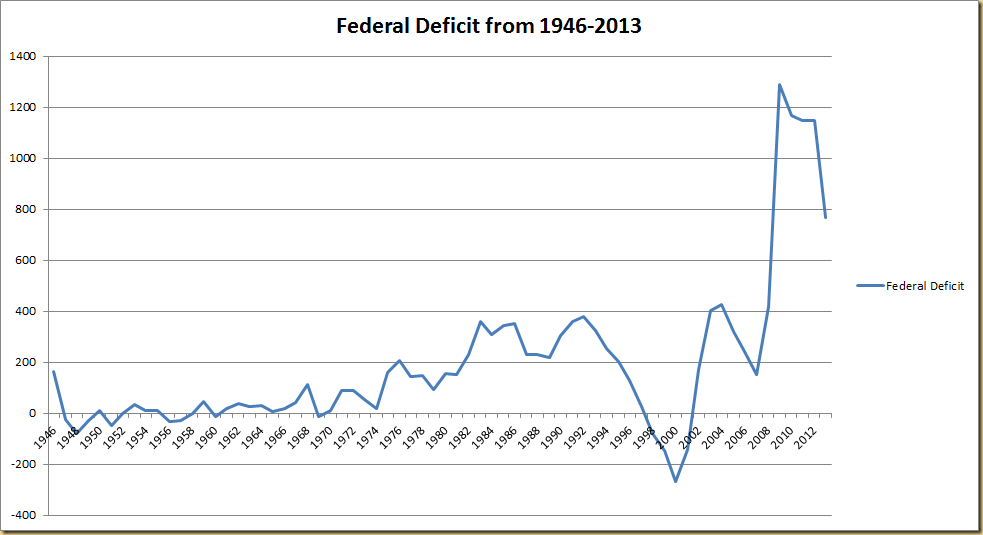 So we see from this charts that once WWII was over we ran pretty close to balance with a few peaks and valleys. In the 70s we start to run only deficits that climb to just under $400B until the late 90s when we balance and then spike up then down and then way up.

If we show the same chart as % of GDP it actually shows that excluding the recent highs (FY2009-FY2013) the deficits are not as big as they appear because of the growth of the economy.  The “worst” time was in the first Reagan term when the economy was stagnant, interest was sky high, and times were very tough. 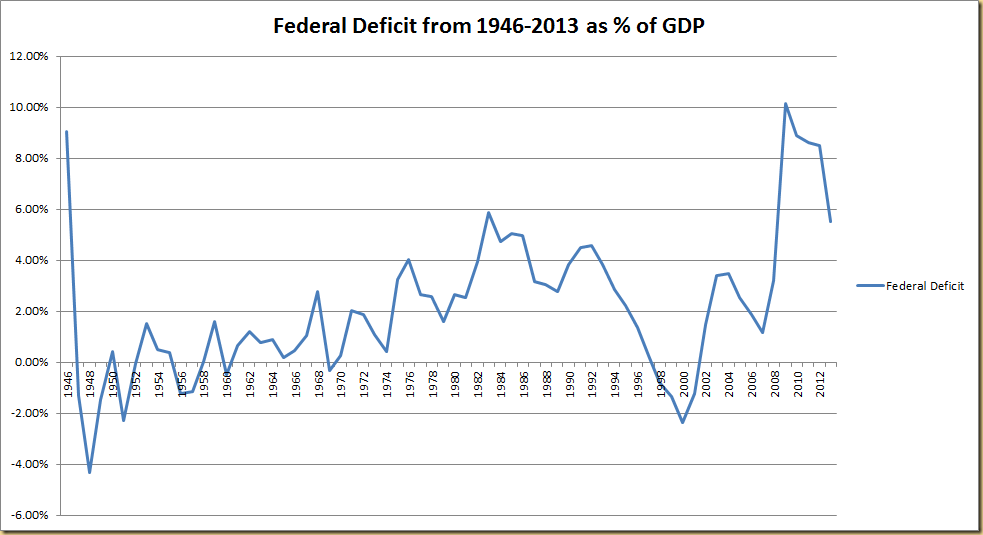 OK, so now we have our baseline.  The problem with these charts is that they don’t show us who “owns” that deficit.  Should blame the President?  Should be blame the Congress?  Both?  What if we just assign all of it to the President.  He is after all the head of the government and the head of State. 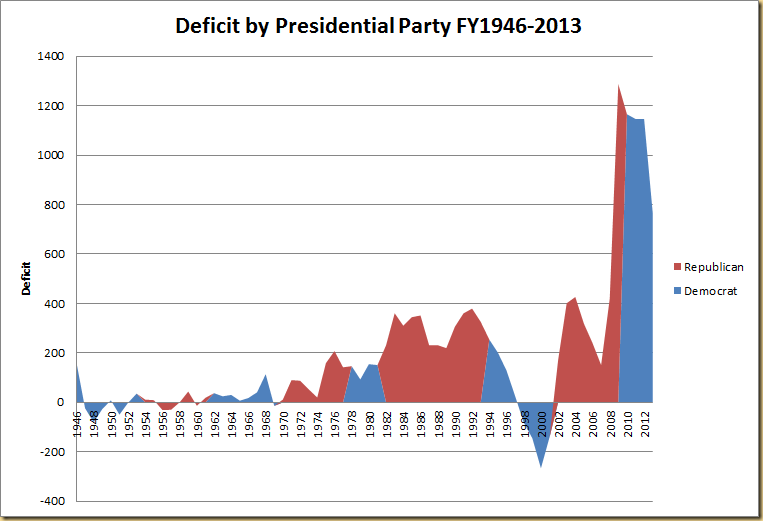 So from this we can tell two things.  One is that it certainly looks like Republican Presidents have more deficits than Democratic ones.  Partially this is due to the GOP being in control of the White House more than the Democrats over the time frame.  We can also look at this as a % of GDP for a better view of what those numbers mean against the size of the economy. 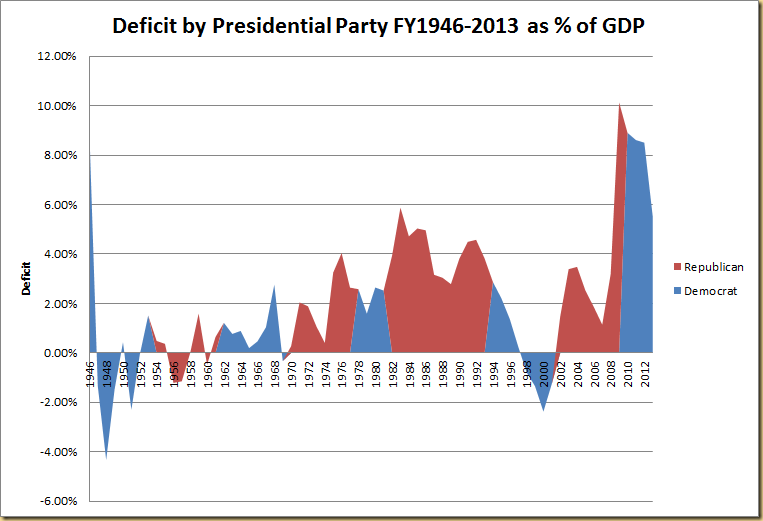 So, its all the GOPs fault that we have such large deficits?  Maybe, but while the President proposes a budget, it is Congress that actually passes it and the President signs it. Now the President will usually suggest a budget, the opposition in Congress will suggest a budget and then they compromise on something in between (except for the past three years when we have had no budgets at all).  So, what if we gave Congress half of the responsibility for the deficit?  What might that look like?  Well, it might look like this: 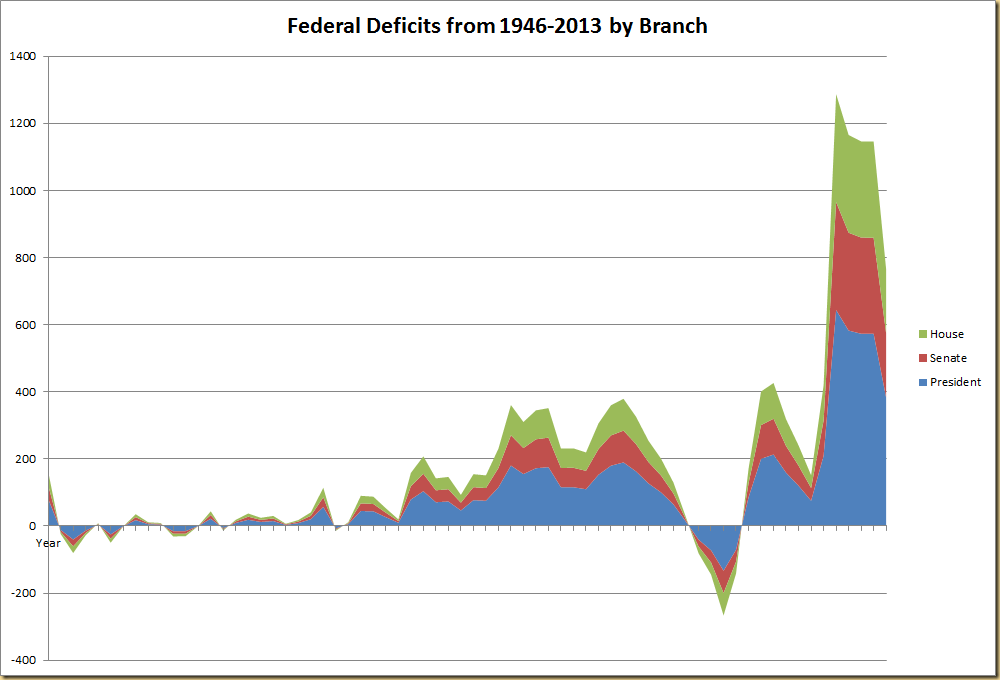 In case you were wondering about the totals it looks like this?

This is interesting and we will continue with this, but I think that the proportions are incorrect.  Since the Budget, by law, has to start in the House, shouldn’t they get more of the responsibility?  In this alternate view, the House gets 50% and the Senate and the President each get 25%. 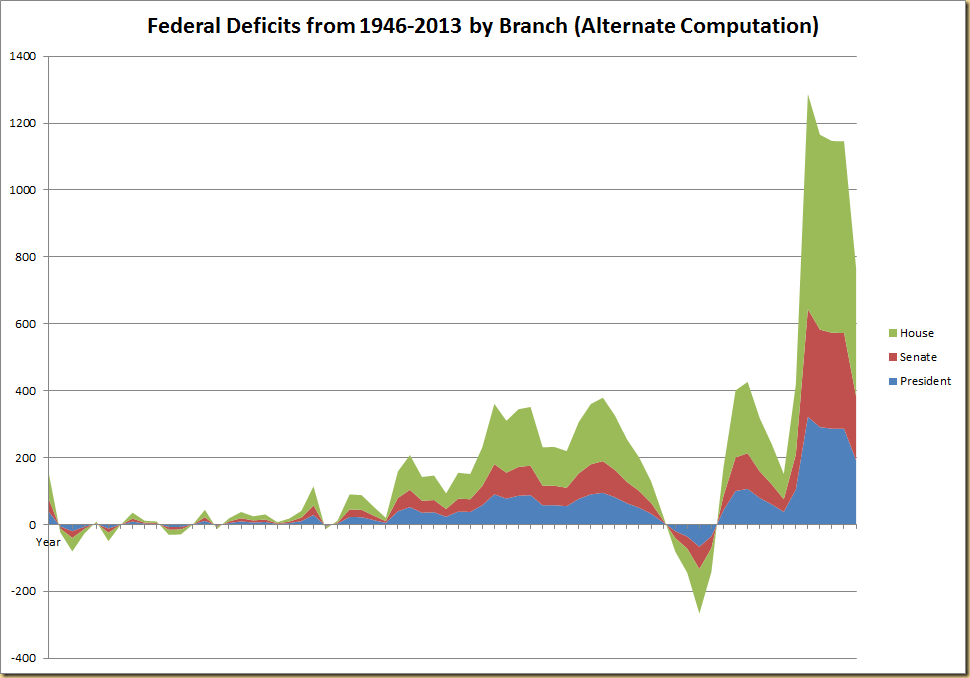 The breakdown is just like before, but with the House taking responsibility for the $6.4T and the President gets only $3.2T.

Now that we have a breakdown (well two actually), we can then apply the political party to each of these and see what that looks like. 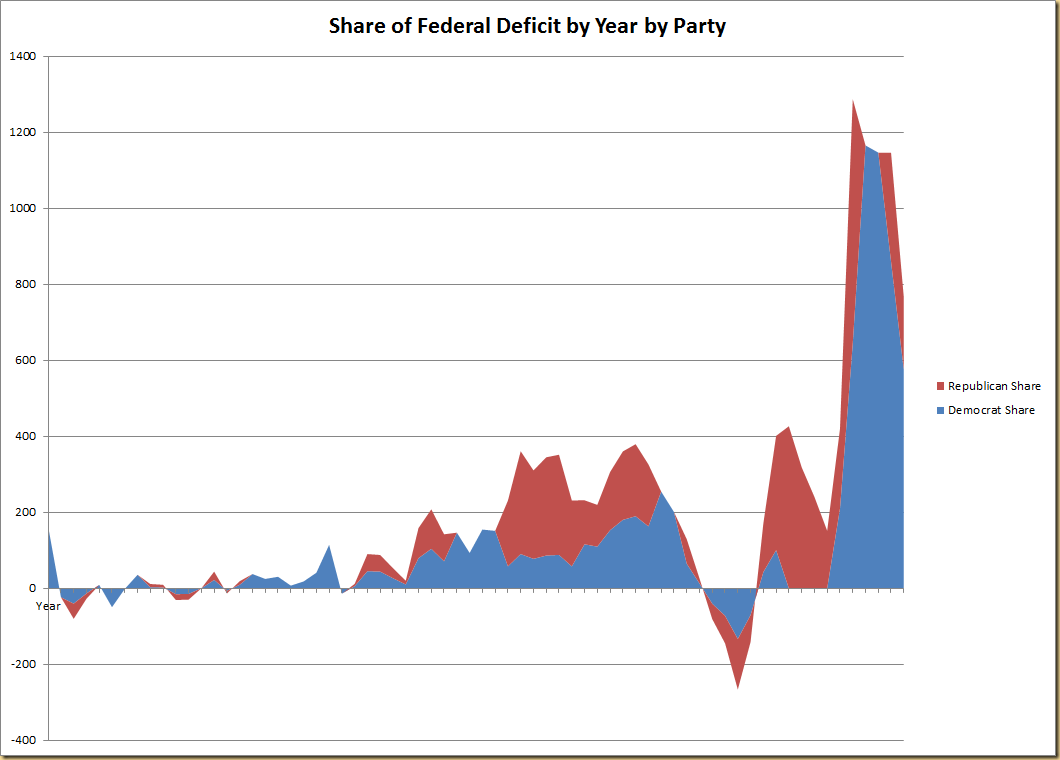 Hmmm…that is a lot more Blue than Red now…but what if we weight it more towards the House than the President? 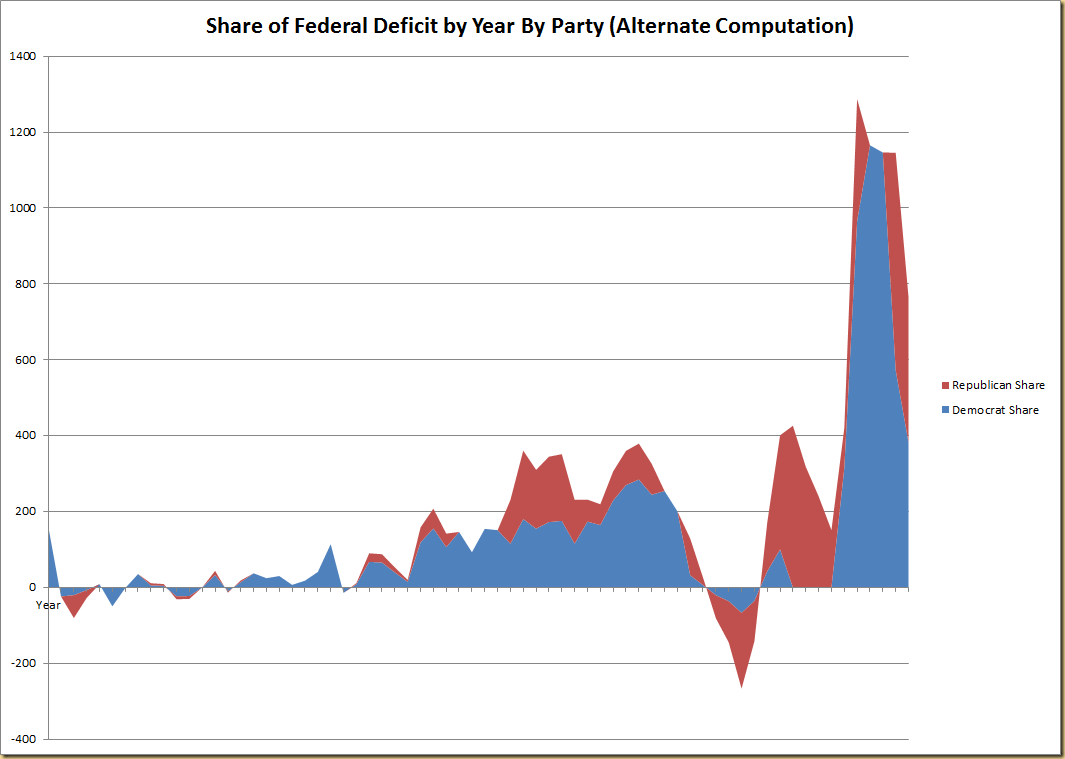 Oh, that makes it worse for the Democrats doesn’t it.  Raw numbers look like this? 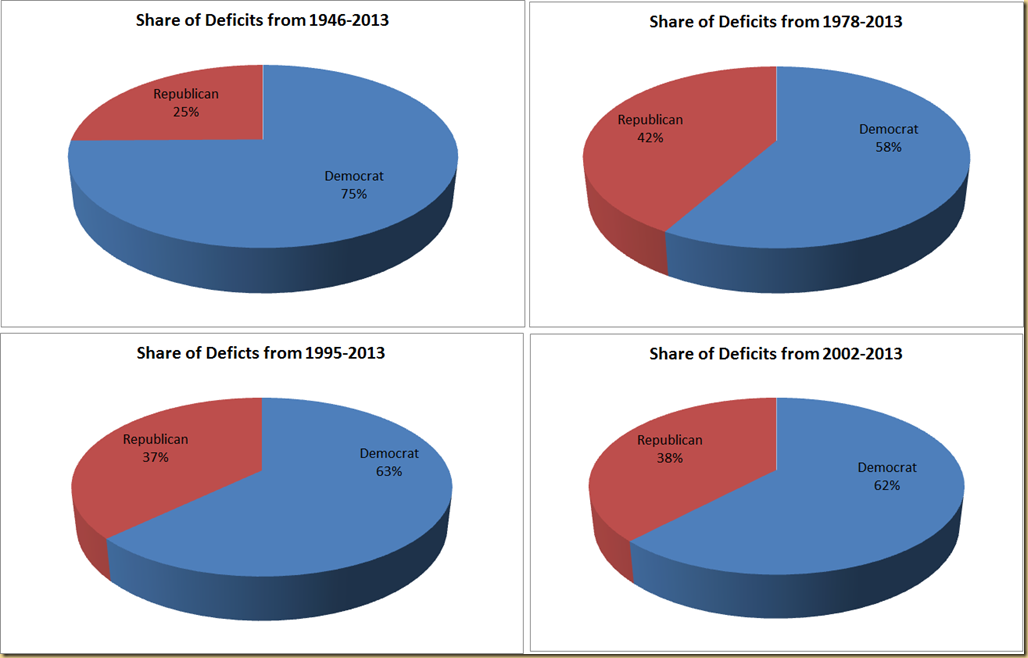 And then with the House getting 50% of the blame. 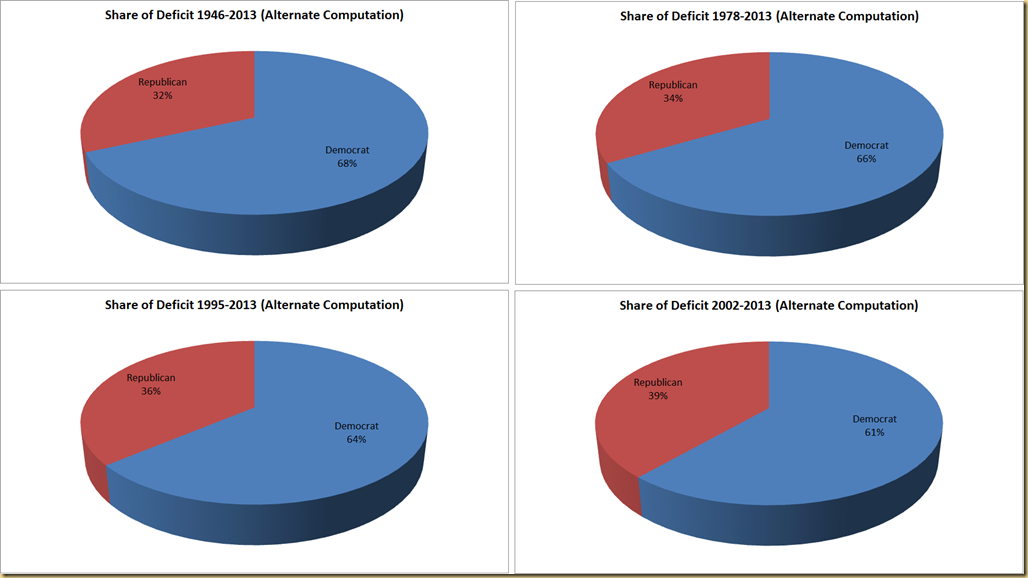 Here is the raw deficit numbers as a graph 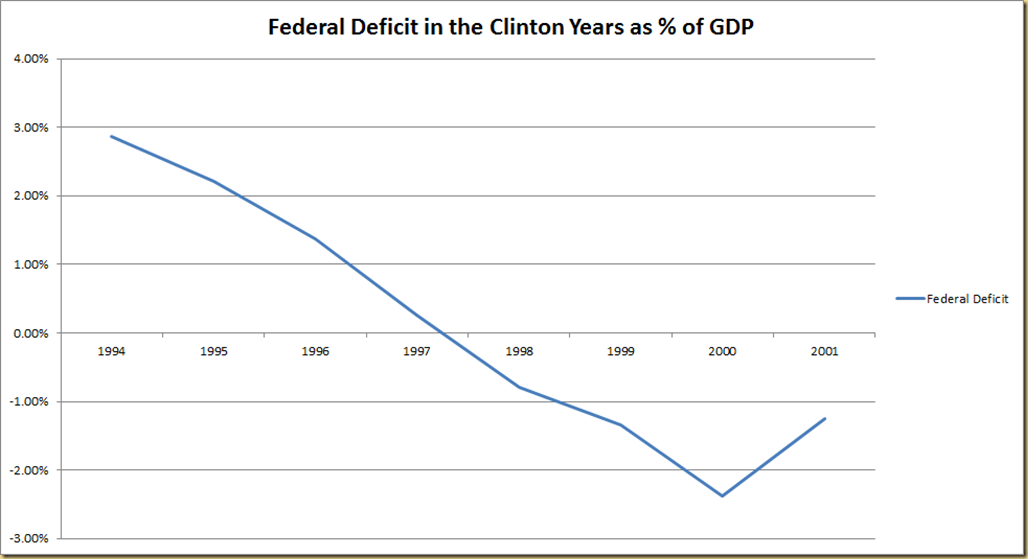 Those look great.  So lets look at them by party… 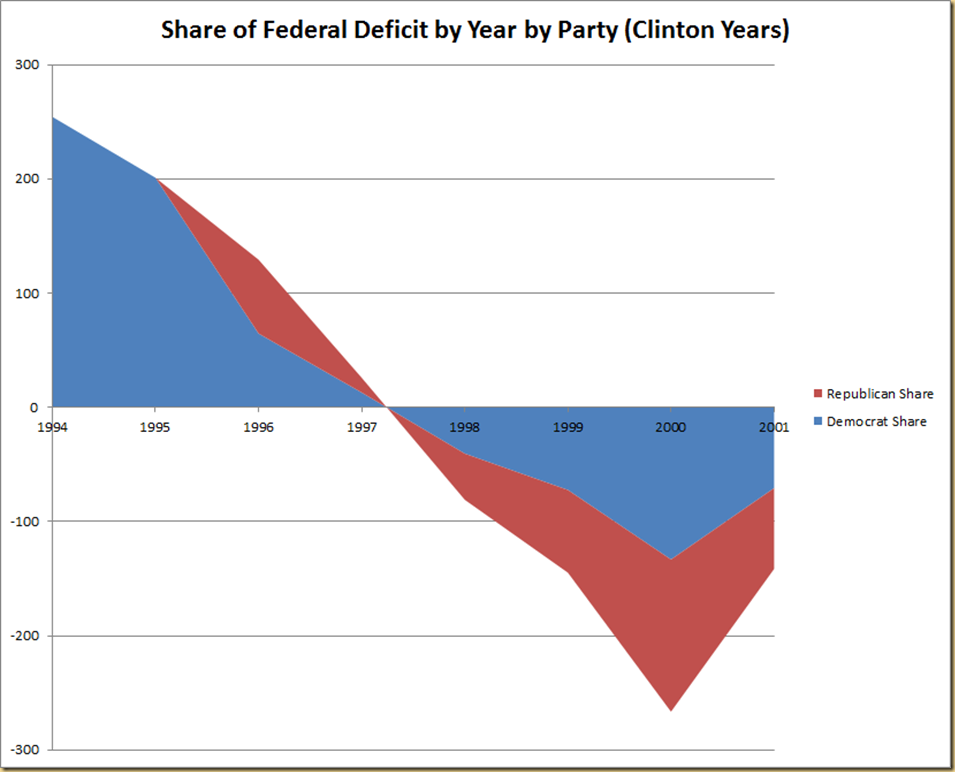 So, the Blue takes most of the deficit and about half the surplus…but what if we attribute it to the House? 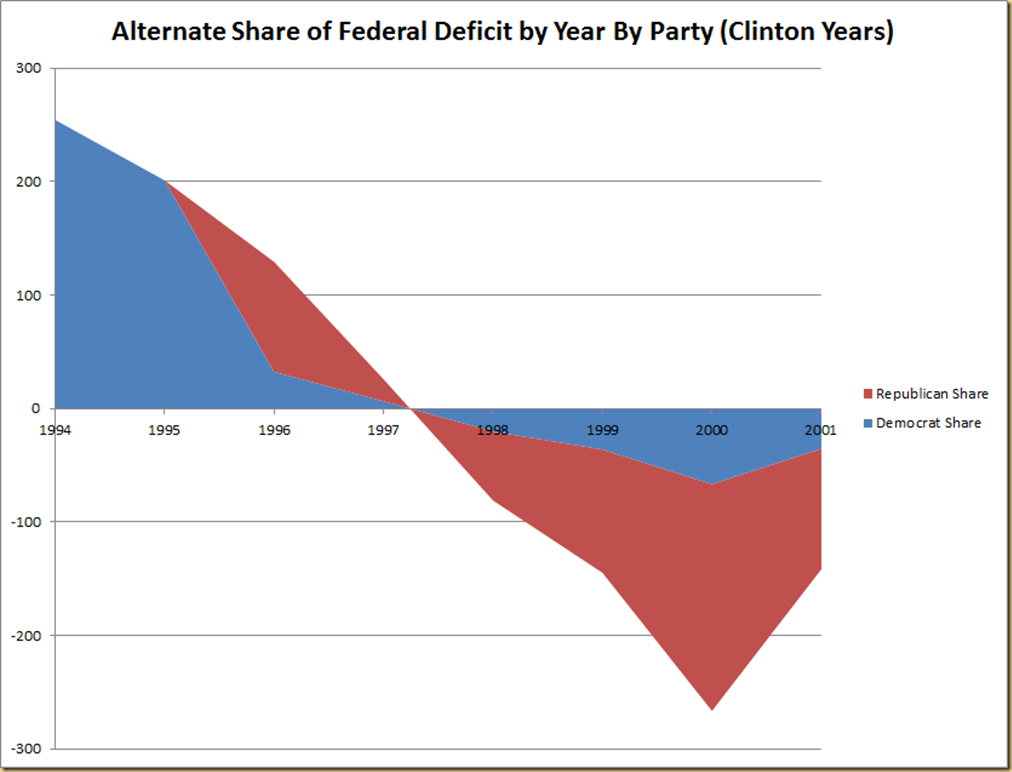 Wow, that is worse for the Democrats and better for the GOP.

The raw numbers for the Clinton Years?

So in the absolute best layout for the Democrats, President Clinton’s 8 years in office the Democrats still racked up the deficit and the Republicans actually created the surplus.